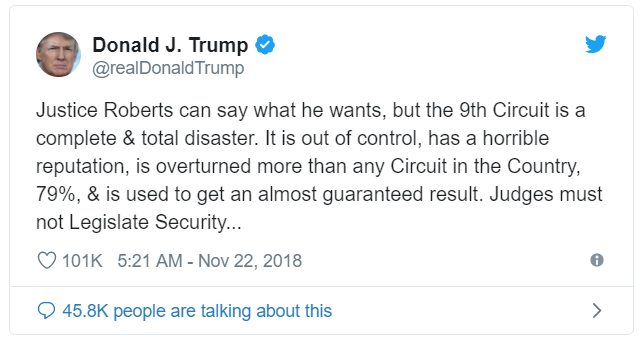 This tweet unleashed a tempest in a teapot, with a host of inane "fact checks." The purpose of this article is to show that everybody was wrong and nobody asked the right question in the first place. But first, we'll look at the questions they asked.

After Trump apologists had finished observing that the 9th Circuit is indeed the most reversed (but without observing that it is also the most affirmed), a horde of "fact checkers" began observing that the 9th Circuit reversal percentages were below this or that other circuit. Using observations from cherry-picked periods of time was a favorite. Some even looked at individual terms, as if reversal percentages based on tiny numbers of cases are even worth talking about. They slavered and barked over trivial differences in percentages, apparently unaware that, probability theory aside, dividing up an integer number of reversals among circuits as fairly as possible will almost invariably result in differing reversal percentages (a fact discussed in the notes section below). Yes, it was THAT bad.

Doing this, we can see that confidence intervals do not overlap for the First Circuit and apparent miscreants like the 6th, 9th, and State Courts, indicating that the First Circuit's reversal percentage differs significantly from theirs. We also see that many confidence intervals overlap. In particular, the overlap of the 6th, 8th, 9th, and State Courts is very strong. This might suggest that babbling about the difference in reversal rates for these courts is a waste of time.


An Exercise in Data Dredging

All well and good, but what we really want to know is: what is the probability that the difference in reversal rates between Circuit A and Circuit B is due to chance? We can compute this value for all 105 (15 choose 2) pairs of circuits, and get this interesting table, with the p values for the 105 pairs shown below the main diagonal of 1's:

Which pretty much confirms that all that yammering over who has the worst reversal rate was a waste of time. The probability that the Ninth Circuit's reversal rate differs by chance alone from the 6th, 8th, and State Courts is 30%, 86%, and 95%, respectively.

But the table above is hard to read. We would more likely just want to see the 105 pairs sorted in descending or ascending order by p value, which is a lot easier to digest. (Which court is denominated Court A or Court B in the pair is arbitrary; order is irrelevant.)


Some pretty low p values there, well below .05. But there is a problem. We tested 105 hypotheses. With that many tests, you would naturally expect some, say about five, to turn up significant at the .05 level, by chance.

There are many ways to adjust for this. We will use the Benjamini-Hochberg procedure. This allows us to specify a percentage of false "discoveries" that we are willing to tolerate. Setting this level to 10% makes the first three tests (First Circuit versus Sixth Circuit, Ninth Circuit, and State Courts) significant. These are highlighted in violet. Setting the tolerable false discovery level to 20% adds another ten, through Second Circuit - State Court, at a p value of .02223. These are highlighted in lavender.


Why it all means nothing

The major premise in the teapot tempest seemed to be, "If a circuit has a high reversal rate, it is lazy, stupid, biased, or feckless, and must have a high error rate in its decisions." Or something like that.

The problem is that the reversal rates do not tell us much of anything, other than that the Supreme Court is more likely to reverse than affirm. Given that the main role of an appellate court is to correct errors, this is unsurprising.

But that grand experiment will never happen, so in the meantime, we can muck around with some logistic regressions and misinterpret them as implying causality.

How about dividing a circuit's reversals by the total number of cases it handles? People have tried that. It would put a lower bound on the circuit's overall error rate. Other than that, it would not tell you anything about the circuit's overall error rate, which might be much higher. It is analogous to estimating the overall manufacturing defect rate for widgets from a handful of hard cases presented to the chief widget inspector.

So the real question — how correctly does each circuit decide its cases? — remains unanswered. And that is the question people should care about.


Why variation in reversal rates is (nearly) unavoidable

Given the data, it is impossible to avoid some variation in reversal rates between circuits, even if we try to avoid it by apportioning reversals as closely as possible between them. The fourth-grade arithmetic reason for this is that the overall reversal percentage is computed as 650/914. You can reduce that to 325/457, but not further, because 457 is a prime number. You can only assign an integer number of reversals to each circuit. It is impossible to find an integer i such that i/(circuit number of cases) = 325/457 for any circuit, given the total number of cases in each. If you try to assign the integer that comes closest to solving this for each circuit, you will end up with something that looks like this:
Would somebody from Vox or the Daily Kos write an article about this, excoriating the 1st circuit? Probably. The point here is that the discrete nature of the data makes it extremely unlikely that we will ever have equal reversal rates in all circuits, even if the true probability of reversal were exactly the same in all circuits. Discrete data is a great boon to journalists. For example, if you expect 1.77 landfall hurricanes in the U.S. per year, the number of hurricanes in a given year will always be above or below average, and you will always have something to write an article about.

In the article we use the term "circuits" to refer collectively to all listed categories of court. It would probably be advisable to exclude State Courts, Federal Circuit, and District Court from the analysis and concentrate solely on roughly comparable federal circuit courts, but if we did that, people would complain bitterly about the exclusion. Besides, there is a lot of variation between circuits in the proportions of cases of different types, and going down such a rathole was not the purpose of this article. Actually, I'm not sure what the purpose was.

Frankly, viewing reversals as a binary variable is rather silly. It's one thing for a close decision of a lower court to be reversed by a close decision of the SCOTUS. Might be a matter on which reasonable minds could differ. It's quite another for a unanimous decision of a lower court to be unanimously reversed by the SCOTUS (as in R.A.V. v. City of St. Paul, 505 U.S. 377 [1992]). A more refined measure of disagreement between lower courts and the SCOTUS would be useful. I'm sure people have done that, but don't have a reference. Washington University's Supreme Court Database has a variable called "lcDisagreement," but the variable lacks sufficient detail to be of use in such an analysis.

It would also be interesting to analyze whether slight changes in the composition of lower courts — circuit courts of appeal and state supreme courts — might radically alter reversal rates for those courts. You could construct something like a ROC curve for that.

"Affirmed in part, reversed in part" offers another rathole.

P value for comparison of proportions

More than one way to do this, with slightly different results in this case, but we ended up using the more common one. Not that it matters much one way or the other.

A sampling of articles about this burning issue that concerns us all:

Data was taken from the source shown below. "Original Jurisdiction" was excluded for obvious reasons (though the Supreme Court does occasionally reverse itself, so we could haggle about that.) "Armed Forces" was excluded because of the ridiculously small sample size.